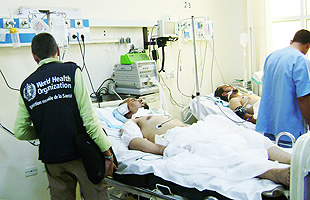 26 May 2011 | Geneva — Despite the decrease in fighting over the last week, the health situation in Misratah remains critical, says the World Health Organization (WHO) following a two-day interagency assessment in the western Libyan town. Misratah, Libya’s third largest city, has been the scene of heavy fighting since the beginning of the civil unrest.

The medical record system was affected by the conflict and no reliable information on casualties can be obtained. However, available figures suggest that an average of 12 people were killed and 70 injured everyday until one week ago.

Shortage of medical supplies and personnel

A shortage of midwives and specialized nursing staff, especially in operating theatres, intensive care units and dialysis services, is reported in all six hospitals in Misratah.

Prior to the conflict, the health system was depending mainly on foreign nurses. Since fighting broke out, 80% of all nurses have either left Misratah or have been unable to reach health facilities due to insecurity.

Doctors working in emergency units have been working around the clock for more than 80 days and are reaching exhaustion. They have not received salaries since the beginning of the conflict.

Medical items such as chemotherapy drugs, anti tetanus toxoid, and most children’s vaccines have reached a critical level of shortage. Several antibiotics are also needed to prevent drug-resistant infections in intensive care units.

A large part of the equipments and medical records of the hospitals was destroyed or lost due to shelling or during the transfer between hospitals and will need to be replaced urgently.

Health partners are now preparing a detailed list of supplies required to continue supporting health facilities in Misratah. The community has begun rebuilding the polyclinic and local cancer institute, both hit during the conflict.

During the assessment mission, WHO installed the Logistic Supply System software in the local central pharmacy and a trained five pharmacists on its use.

The provision of longer-term psychosocial and physiotherapeutic support is vital and will become a priority if the fighting continues to decrease.

Since the beginning of the crisis, WHO has provided five interagency emergency health kits and five trauma A and B kits to Misratah, providing enough basic medicines and supplies for 50 000 people and specialized drugs and consumables for 500 surgical interventions.

WHO has also assisted wounded evacuees by setting up logistics support systems to ensure the provision of medical supplies to all health facilities receiving evacuees.

Greatness in Ordinary: The Spirit that Inspires GAC Motor