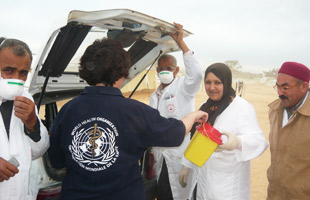 15 March 2011 Shousha transit camp, Tunisia–Tunisian Ministry of Public Health, supported by WHO, UNICEF and other health partners, started a vaccination campaign for an estimated 100 children under 5 years currently residing in camps. Strong winds and whirling sand are slowing down preparations, but the organizers are aware of the critical importance of vaccination.

‘As the number of families arriving at the camp incrementally rises, coupled with the fact that the length of stay of some of the families can get longer especially for those from Somalia and Eriteria (countries in conflict themselves), the risk for vaccine preventable illnesses in children inherently goes up’ says Dr. Irshad Shaikh of the World Health Organization. ‘We hope we will be able to cover all children in couple of days’.

The vaccination includes 7 antigens – diphtheria, tetanus, poliomyelitis, BCG, measles, whooping cough and hepatitis B. For children who have their vaccination records, necessary remaining vaccines will be administered.

The vaccination campaign is part of a broader medical response provided by Tunisian authorities, WHO and other health partners to the refugee crisis caused by civil unrest in Libyan Arab Jamahiriya. According to Tunisian authorities, more than 130.000 persons of more than 60 nationalities have already entered Tunisia from Libya.

Currently, 18 000 people live in Shousha transit camp and this number is likely to increase as arrivals still outpace the number of repatriations.

‘For the time being we don’t see any major acute disease with epidemic potential but we need to remain vigilant’ says Dr. Tarek Jandak from the Sfaks regional hospital in Tunisia. According to figures from the Ministry of Public Health from 24 February to 11 March 2011, there were a total of 7 892 consultations at Shousha camp.

Uncertainty over situation in Libya

The continuing lack of humanitarian access to Libya means that there is no reliable information on the health situation inside Libya. For the time being, those who crossed into Tunisia were mostly male, migrant workers but it is estimated that more than one million foreign workers are still inside Libya. It is feared that ongoing violence could lead to a massive influx of Libyan nationals into neighboring countries.

The International Federation of Red Cross and Red Crescent Societies and United Arab Emirates are setting two additional camps with a capacity for 17 000 people to cope with the potential increased numbers of new arrivals.

The Ministry of Public Health and WHO are working closely on strengthening local surgical and trauma care capacities in the event of massive influx of wounded and injured patients. The hospital in the nearby town of Ben Gardane, with needs of additional equipment for intensive care units, surgery and sterilization facilities, is being assessed for necessary support.