RIYADH, Saudi Arabia, Oct. 7, 2019 /PRNewswire/ — United Nations Under-Secretary-General and Economic and Social Commission for Western Asia (ECSWA) Executive Secretary Dr. Rola Dashti said on Sunday that the role played by Saudi Arabia was giving the world confidence and sending a clear message to the international community that the Kingdom was a responsible country fulfilling its humanitarian and developmental duties toward the countries of the region, especially toward geographically contiguous states such as Yemen. 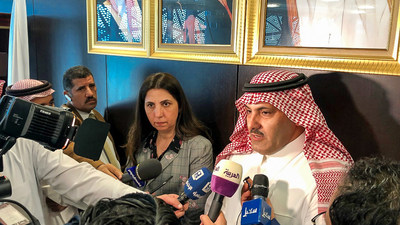 In a statement to the press following a meeting with Saudi Ambassador to Yemen Mohammed bin Saeed Al Jabir and staff from the Saudi Development and Reconstruction Program for Yemen (SDRPY), Dr. Dashti said that ESCWA supported the Kingdom’s developmental approach to helping the Yemeni people achieve stability, prosperity, security, and decent economic and social conditions.

Dr. Dashti praised the development operations of SDRPY, emphasizing the need for a unified development roadmap in which all Yemenis could participate. She also applauded the program’s efforts to move from the humanitarian aid and relief phase to development. She pointed out that the purpose of the visit was to establish closer cooperation and collaboration within the framework of the program, which links stability directly to sustainable development.

ECSWA Director of Emerging and Conflict Related Issues (ECRI) Division Dr. Tariq Al-Alami; and ECSWA Secretary Karim Khalil accompanied Dr. Dashti to the meeting with SDRPY Supervisor-General Amb. Al Jabir at program headquarters in Riyadh. At the meeting the two sides reviewed SDRPY strategy and the most important activities and projects implemented by the program’s field offices in Yemen. Amb. Al Jabir stressed the program’s readiness to work with ECSWA to achieve development in Yemen, in addition to building institutional capacities, and to expand knowledge and experience in the development sphere.

“With regard to areas of common ground between SDRPY and ECSWA, they are very numerous,” Al Jabir said in response to a press question at the meeting. “Perhaps the most important area is stabilization and peace-building, as well as capacity-building among the brotherly Yemeni people.”

On the meeting’s outcomes, Al Jabir added: “We discussed with the Commission the possibility of working together in support of our brothers and sisters in Yemen and developing a vision that builds on what both the region and the international community have experienced, in particular, the Kingdom’s role as the biggest supporter of Yemen for decades up to the present day.”

The Saudi envoy to Yemen pointed out that the Kingdom had supported Yemen with billions of dollars, that the program was working according to a strategic plan to ensure that this support was properly directed and allocated, and that SDRPY wanted all other countries to participate through the Yemeni government to help achieve a comprehensive vision. Al Jabir also explained that the program had launched 70 projects in Yemen in seven main sectors, in addition to providing support to the Central Bank and power stations.

Al Jabir said that the program would cooperate with ESCWA in the areas of technical support and capacity-building, and reiterated that the program aimed at a common vision, in which ESCWA and all relevant international organizations would contribute, with the participation of all Yemenis and stakeholders from the Yemeni side.