According to PV Tech’s long-standing analysis of R&D spending of leading PV module manufacturers, only SunPower has come close to LONGi’s level when, in 2015, R&D spending accounted for 6% of revenue and First Solar topped 5.1% in 2011.

However, one of the key metrics is that LONGi surpassed perennial top ranked R&D spenders, First Solar and SunPower, respectively, by a significant margin. Both companies cut R&D spending in 2017, the first time for SunPower in four years, while First Solar trimmed R&D spending for the third consecutive year.

In contrast, LONGi has increased R&D spending for six years in a row and has maintained a high-level of R&D investment over the last four years. 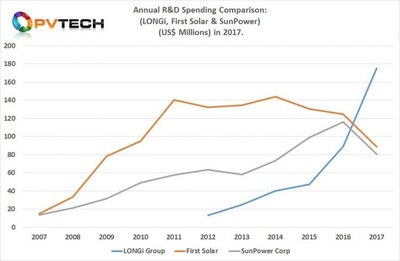 However, in reporting R&D expenditure of US$175.7 million, LONGi also set a new annual solar industry spending record, according to PV Tech’s analysis.

SunPower remains second ranked at over US$663 million in the same time period. However, LONGi has jumped ahead of several other PV manufacturers to take the third ranked position with over US$390 million in cumulative R&D spending since 2012.

Original PV Tech article can be found at: https://www.pv-tech.org/news/longi-sets-solar-industry-record-for-rd-spending

Suntech and Enerray signed a contract for supplying modules in Egypt