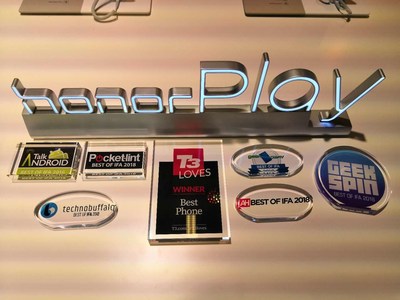 The launch of the Honor Play offers young people an unprecedented gaming performance and a 24/7 “Always On” entertainment experience. The global launch at IFA 2018 introduced two industry leading smartphone technologies to gamers and casual users: Honor’s GPU Turbo, which dramatically increases the graphics processing and computing efficiency, and the advanced AI camera technology.

“We are proud of the strong support from media and across the market. The Honor Play offers young people what they really want from their smartphone, an immersive non-stop gaming and entertainment experience. This recognition confirms the Honor Play is the ‘Game On’ moment the industry has been waiting for,” said George Zhao, President of Honor.

Launched in Berlin this August, the Honor Play is a mid-range performance beast designed with GPU Turbo, the ground-breaking graphics processing technology that meets the demands of young gamers for a “lightning fast” graphics processing capability and power consumption. The Honor Play also features an enormous 6.3 inch FullView display with an outstanding 89% screen-to-body ratio and a huge 3,750mAh battery that supports at least 4.5 hours of gaming. The Honor Play will be available at of €329 for purchase at HiHonor.com in global markets including Western Europe (UK, France, Germany, Italy and Spain), CEE & Nordic, Middle East, Russia, India and Asia Pacific.

Honor is a leading smartphone e-brand under the Huawei Group. In line with its slogan, “For the Brave”, the brand was created to meet the needs of digital natives through internet-optimized products that offer superior user experiences, inspire action, foster creativity and empower the young to achieve their dreams. In doing this, Honor has set itself apart by showcasing its own bravery to do things differently and to take the steps needed to usher in the latest technologies and innovations for its customers.

IFA is the world’s leading trade show for consumer electronics and home appliances. It will take place at the Berlin Exhibition Grounds (ExpoCenter City) from 31 August to 5 September 2018. Alongside the event, IFA Global Markets will take place from 2 to 5 September at Station Berlin, bringing together buyers and OEMs / ODMs at Europe’s largest sourcing show for the electronics sector.